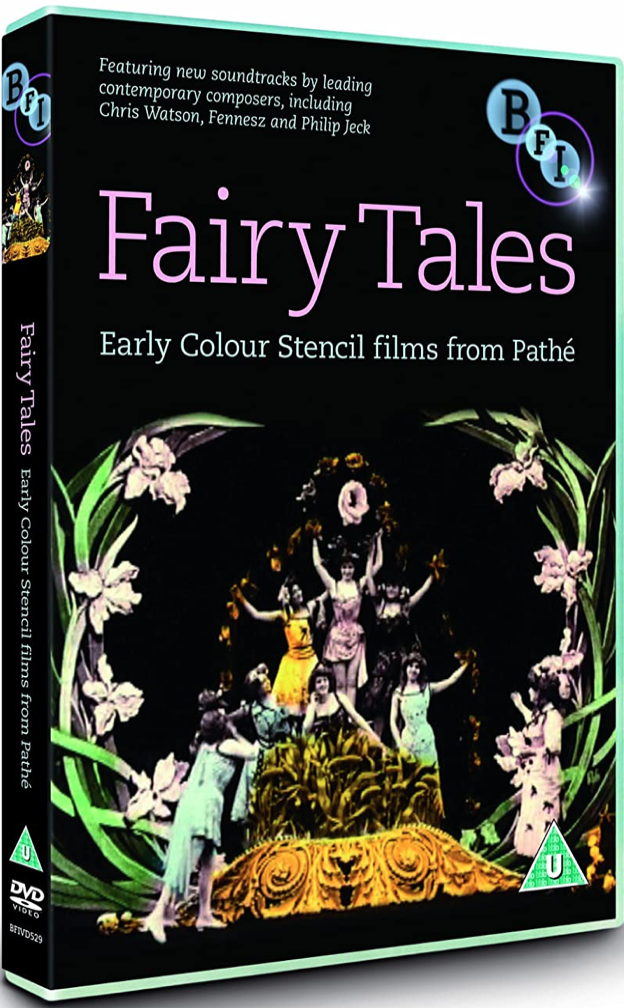 Once upon a time during the belle époque in turn-of-the-century Paris, a short-lived film form called ‘scènes de féeries’, or ‘fairy films’, was becoming popular thanks to the Pathé Frères company. In jewel-like colours the films, made to appeal to young and old alike, recreated the theatrical spectacles of the age with their fantastical settings, dancing girls, mythical beasts, supernatural beings and a plethora of stage tricks enhanced by the techniques of the new medium of film.

Presented on this now out-of-print DVD with original hand-colouring, each film is accompanied by recording artists from the leading experimental label, Touch. Contributions from such acclaimed composers as Fennesz, Chris Watson, Hildur Gudnadottir, Philip Jeck, Jana Winderen & others combine in often surprising ways to create a unique and unforgettable experience.

All sounds were recorded underwater

In the 1903 film “The Conjurer’s Lottery”, a farmer hits the jackpot at a fair and wins a hen that lays golden eggs. However his good fortune is only brief, since thieves steal the gold and the farmer can no longer afford his upstart life style. He kills the hen in order to get to a last money-making egg. Instead of the anticipated gold rush, the devil appears. Films of this kind were shown at carnival fairs to entertain the public. The soundtrack took up the comedic aspect of these performances, entertainment that oscillated between plaudits, merriment and slight trepidation. The film’s background music is made up of field recordings of today’s carnival fairs and amusement parks (roller coasters, funhouse rides) as well as the sounds of computer games (MineCraft, Temple Run, Doodle Jump). The audio logos of online brokers and gambling websites are also blended in, as well as the sound from porno and horror films and other sounds of modern life (burglar and clock alarms, acoustic fault alarms). Also in the mix are manually played gramophone records, as well as modified instruments such as e-guitars and piano.

Prepared and performed live to the film

Prepared and performed live to the film

A trip to the magical underground gold foundry of the dwarves

The London Snorkelling Team were overjoyed at the opportunity to perform a new version of the music for the Black Pearl as it is one of the band’s favourite film soundtracks. The band also thought it was a great opportunity to iron out some of the mistakes in the original, and now very outdated soundtrack recording.

The soundtrack for the “Black Pearl” was written by Tom Haines, performed by the London Snorkelling Team and recorded at Brains and Hunch.

The BFI would like to acknowledge the enthusiasm and generous help of everyone who contributed to this release. Special thanks to Mike Harding, Bryony Dixon, Michael Brooke and Douglas Weir.
Thanks also to Esha Gupta, Philip Dumas (re:fine), Stephen Ford and Nikos Tzerbinos (IBF), Ian Vickers (Eureka! Design Consultants)