Image printed on 225gsm Somerset Photo Satin – this has the feel of watercolour paper, but captures the colour and detail extremely well. Hand numbered and signed (by Jon Wozencroft), limited to 100 copies. 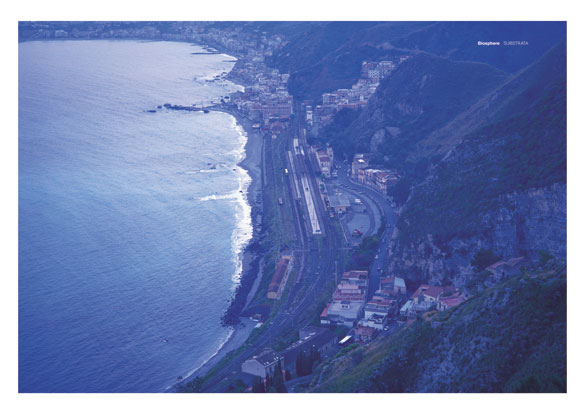 A3 archival print | Jon Wozencroft “The Planet is Blue”

The picture was taken from a vantage point in Taormina, Sicily, in April 2001. 1000s of people must have taken a photograph from this spot, so it surprises me that many people single this out as one of their favourite Touch covers and I don’t disagree – how can one take heed of the other versions that will never be seen?

There were no postcards on sale. So instead of playing on the idea of “the photographic moment”, possibly this is a place that conjures up “the photographic universal”.
Giardini Naxos, a railway hub beneath Mount Etna, as seen from Taormina which has amazing food, a Roman amphitheatre and a film festival. I liked the idea of people swimming next to a railway station.

I was overjoyed to get the chance to do a cover for “Substrata”. It is one of my favourite recordings of its time (the progressive year, 1997) and I’d observed how it had such a climatic effect… I’d listened to it, amazed, on holiday in Crete that summer, it became a hot record for me, whilst supposedly being from a cold environment.

Maybe Biosphere was the answer to dub reggae, especially the music of Augustus Pablo. One of the best compliments I was ever paid, came from a friend when she said the Newcastle concert on the 2001 tour was mixed like a Pablo version… Now I’m glad that these versions bear this out, vividly. King Tubby Meets the Rockers in a Coldhouse?

Instinctively, I shot this on 35mm tungsten film which gives it a blue cast, which was an attempt to get a “Day for Night” ambience, (referring to the film by Truffaut). What I didn’t realise was how difficult this would be to print. We scanned it as RGB to get the detail and colour saturation, then we had to work out how to satisfy the CMYK format. There was hardly anything in the black channel.

Taormina features a lot in the film “Le Grand Bleu” (The Big Blue) by Luc Besson. It’s about deep sea diving. It seemed to me an interesting counterpoint to Geir’s love of the mountains, to think of the equivalent below the waterline. [Jon Wozencroft, May 2010]

Double Exposure
File saved: 16.May 2000, 14:08, Lunheim, Tromsdalen
A rebuild of an old track with none of the original elements left.

The Things I Tell You v.4