1. Descension
2. Brick by Brick
3. Listen to the sound of the earth turning
4. Coda (Sailing Stones)

You can listen to an extract here
Buy in Bandcamp

Robert Crouch is an artist and curator whose work encompasses sound, performance, and technology. As an artist, he locates his work with the intersection of post-phenomenological listening practices, conceptual sound art, and contemporary electronic music. At its core, his work can be understood as a conversation between tonality, context, history and subjectivities. Similarly, Crouch’s curatorial work focuses on the overlapping disciplines of sound, technology, movement, and performance.

Sublunar continues Crouch’s inquiry into the complex relationships between sound, context, and meaning, first proposed in his 2016 release, A Gradual Accumulation of Ideas Becomes Truth (Line). The four tracks which comprise Sublunar were composed using field recordings from and audio files originally created for mas gestos y mas caras, a collaborative performance with artists Rafa Esparza and Yann Novak. mas gestos y mas caras was a durational performance incorporating sound, breathing, and a series of repetitive actions and gestures, choreographed within an architectural installation of adobe bricks fabricated and designed by Esparza.

Sonically, Sublunar is a radical departure from the originating performance, yet these tracks remain tethered, literally and aesthetically, to the processes and context of their construction: Esparza’s labored breathing, cautious footsteps, a soft cascade of water, dust, soil. The title itself, Sublunar, reinforces an attachment to the Earth and the physical world, and intentionally resists metaphysical interpretation or decontextualization.

It is precisely through this tethering that Crouch seeks to open up a diversity of possible approaches to the work, rather than confine our reading to a primarily or exclusively musical text. The first track, Descension, opens with sounds of breathing, muted movements, and environmental noises, and serves as an acknowledgement of our collective understanding of sound, of these specific sounds, as physical phenomenon. By extension we are allowed to consider this particular organization of sound itself as a kind of sculpture, architecture, and choreography. The body becomes the primary oscillator and architect, delineating boundaries and defining the work as a space within which we might inhabit.

Crouch’s last release, A Gradual Accumulation of Ideas Becomes Truth (Line), was a heavily conceptual work touching on location and memory that, even divorced from its intellectual underpinning, was an excellent piece of sound art. Sublunar may not be as steeped in concept, but again the audio (a live performance mixing existing material and field recordings) is the most important facet, and again he excels in creating a disorienting piece of familiar and unfamiliar sounds that blur together wonderfully.

Sublunar is the result of a live performance utilizing source material from fellow artists Rafa Esparza and Yann Novak as part of mas gestos y mas caras, a multimedia performance including sculpture and performance art. His reworking of the material is drastic, resulting in a performance split into four pieces of a very different sound and sense. A light static ambience enshrouds “Descension,” capturing a variety of found sounds, like an insistent beeping sound that could be almost anything. Crouch works the various layers of sound together, coming together at times lush and rich, and at others thin and harsher in nature. This constant unending flow makes for a complex, captivating piece of sound.

“Brick by Brick” continues with the delicate water sounds from the previous piece, but at first Crouch keeps the mix sparse. What he does leave in the mix helps to build that sense of space and distance, like the architectural structures of his previous album. The emptiness soon becomes crowded however, as Crouch adds a droning, engine like noise that becomes denser and denser, engulfing the mix before letting it collapse.

The following “Listen to the Sound of the Earth Turning” has a more hushed, meditative sensibility to it fitting the title. With the static hum and detuned radio noise that define the opening of the piece, Crouch conjures the sense of hovering in air, off of the earth but not quite in space. This is only strengthened by the blowing winds that surge throughout, not cold or frigid in nature, but giving the feeling of hovering in open space.

The final part of the performance, “Coda (Sailing Stones)” continues the sense of space from before, but Crouch slowly brings the work back down to earth. The openness is mixed with field recordings of an unspecific nature; environmental sounds that could be recorded anywhere or nowhere. With this he adds some gorgeous tones and synth-like buzzing, shaped into a melodic progression before pleasantly fading away.

Separated from the source material, Sublunar may not have the same conceptual nature of his previous work, but his knack for mixing familiar sounds with unfamiliar ones is still strongly present. Here he manages to create a space that is both comfortable and alien, where the ambiguity simply adds to the quality of the sound. Given this is a live performance; it just makes this record all the more impressive. [Creaig Dunton]

Another new release from the innovative Touch label, this one lands Friday. In addition to issuing a number of fine recordings, Touch sponsors a mentorship program that helps artists with grant applications, business counseling and more. It’s an impressive outfit.

Robert Crouch is a solid addition to the stable. His latest, Sublunar was recorded live in Los Angeles. It’s a subtle, nuanced electronic work that demands – and promptly rewards – a close listen.

His process is part of the story. Crouch’s interests lie in “the complex relationships between sound, context and meaning” according to a write-up accompanying the new disc. By lifting pieces of a previous recording and breathing new life into them, he’s done exactly what he set out to do.

The album’s first piece “Descension,” begins appropriately enough with a recording of Esparza breathing. It’s not immediately recognizable, in part because it’s set within an intricate mix of ambient sounds. Two minutes in, it’s clear we’re in for an intense, detailed listen.

Touch has produced 500 CD copies of Sublunar. It will also be available as a download. [Kevin Press]

“Sublunar” has its origins in a collaborative live performance mixing sound, technology and movement, but the original sonic material has been reworked and repurposed into something which is ultimately much more static. The result is a collection of drones, found hums and atmospheres that almost extol the virtues of non-movement.

The misleadingly titled “Listen to the sound of the earth turning” is even more lightweight, a repeated single robotic note triggering in an evolving rhythm, an exercise in how a sound might be alarming and soporific at the same time. Halfway through, the repeating note fades and warmer hum-chords similar to the opening track return. To complete the arrangement, “Coda (Sailing Stones)” blows cold again, with sporadic noises like water droplets falling in an underground cave, and the slow arrival of a faintly synth-organ-like melodic loop as a crescendo of sorts.

Despite its complex and multidisciplinary origins, “Sublunar” as an audio product is stark and simple. It’s so mellow that it could easily find itself on a sleep playlist, and might serve well as an environmental setting, but it lacks distinctive features or ideas that would make it shine in its own right. 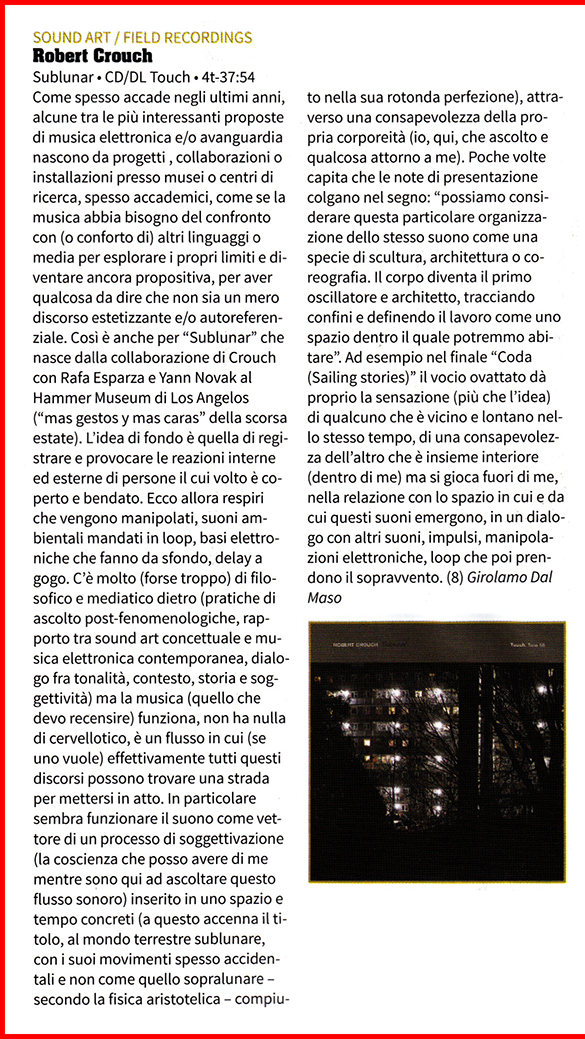