The seventh in Touch’s impeccable 7″ singles series, ‘Despite The Water Supply’ finds avant-garde icon Jim O’Rourke making some of the very finest drone music of his life. You can hear shades of that early, academic work in here – the organ-like sustain is clearly inherited from his late ’80s and early ’90s recordings, (most recently exemplified by his fantastic ‘Long Night’ reissue) but far from the static meditations that characterised those early emissions, these pieces are incredibly developed and intricately detailed, barely even hinting at structure and yet somehow sounding composed and resolved. Perhaps it’s partially due to the short-form nature of the 7″ but you feel there’s an awful lot of activity packed into these two sides. Even those of you not ordinarily favourably disposed towards the genre might just be blown away by this stuff – it’s quite some antidote to anyone under the impression that drone music is all about holding a note down on a synthesizer. Awesome.

Latest in Touch’s 7″ series, this one folks have been clamoring for, comes from Mr. Jim O’Rourke, a name that should no doubt be familiar to most folks by now! Brise Glace, Gastr Del Sol, SONIC YOUTH, as well as about a million more, not to mention a vast body of solo work. Well before O’Rourke was an in demand producer, a guest guitarist, dabbling in noise rock and Appalachia, he was a master of the drone, and this 2 part single track 7″ harkens back to those days, with an amazing and beautiful arrangement of buzz and whir, of excited strings and resonating metal.

It’s almost a shame the track had to be split up on a 7″ as the two parts flow so perfectly into each other. Beginning with a deep resonant buzz, sounds like a guitar, but could be a harmonium, wheezing and whirring, warm and thick and lustrous, bits of feedback lace the blurred drift, over the top delicate high end melodies, float and shimmer, becoming more and more active until they seem to be driving the piece, the whole thing strangely looped and weirdly melancholy, beneath the track, deep rumbling swells pulse and throb. By the second side, the sound has gotten more abrasive, much more scraping and metal buzz, electronic streaks, the sound tangled and constantly shifting, managing to sprawl into an expanse of beautifully noisy dronemusic.

As always beautiful cover by Touch head honcho Jon Wozencroft, and like the rest in the series, probably limited.

Brilliant solo return by the master of space and time. The music is a gorgeous, shifting electronic landscape in which rugs are pulled from under our feet, only to reveal more goddam rugs. Of intricate design! Some of the textures feel guitaric, but there’s no overt string manipulation. Just fingers and rugs. Man are there rugs. [Bryon Coley] 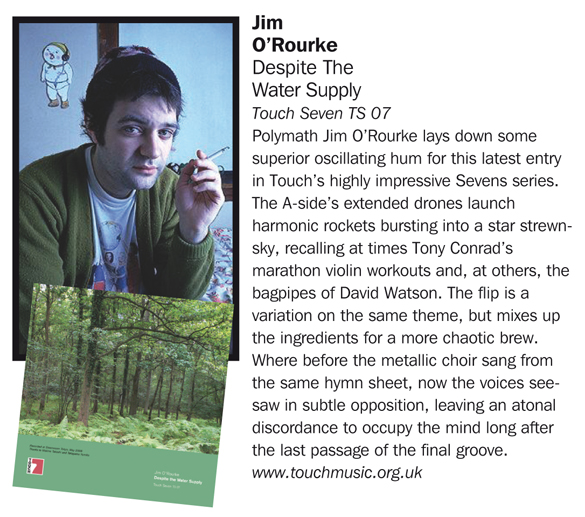