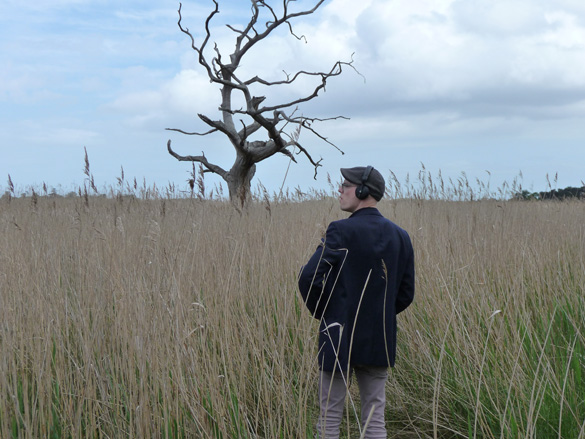 Faster Than Sound bring more imaginative experiments with sound and image to the Snape Proms with The Suffolk Symphony, a specially commissioned residency and new work by leading sonic and visual production company Touch. Inspired by the historic coastline of Aldeburgh and its surrounding area including Aldeburgh Music’s Snape Proms and its history, Touch will create a new audio-visual symphony from scratch, using only locally sourced sounds and images. Beginning on 16 August, Philip Jeck, BJNilsen, Jon Wozencroft, Philip Marshall and Mike Harding will go on a week-long treasure hunt to unearth old records, field recordings, home-made sounds and images to create a new multimedia Suffolk Symphony, culminating in its first performance on the 22 August.
Following the offer of an Aldeburgh Residency by Faster Than Sound’s creative producer Joana Seguro, Mike Harding responded with the idea of creating a new multimedia work purely from locally sourced sound and image. Mike and BJNilsen went on an exploratory field trip in May to make initial field recordings which are being made into vinyl to be used in the performance. The artists are already busy exchanging ideas in preparation for the residency in August, with Jeck drawing inspiration from the work of Benjamin Britten, especially his Simple Symphony, and Jon Wozencroft planning to describe the special place of Aldeburgh on film, shot in real time during the residency.

Directed by Mike Harding with sound by Philip Jeck and BJNilsen and images by Jon Wozencroft, the whole week will be documented for an interactive website (now offline) by Philip Marshall. The residency will feature workshops and presentations by Philip Marshall and Mike Harding, including interviews with the other artists and a Touch showcase, culminating in the performance which will take place in the recently converted industrial space of the Hoffmann Building. The Suffolk Symphony will be subsequently released through Touch.The interviews by Mike Harding during the residency will include a

discussion with his partner Jon Wozencroft about his vision for Touch, now nearly 30 years old, and an assessment of the changes which have occurred in that period. Philip Jeck will discuss his work, particularly the method behind his live and recorded output, which eschews conventional instrumentation. BJNilsen assesses how field recordings have developed as source material for his work, and Philip Marshall describes the way artists communicate their ideas online and how this affects the relationship between them and their audience. Each interview lasts for one hour, including a 15 minute Q & A session, and dates and times will be shortly be announced via the website.

Philip Jeck is perhaps best known for his highly subversive work Vinyl Requiem (Time Out Performance Award, 1993) with Lol Sargent, a performance for 180 Dansette record players, 12 slide- projectors and 2 movie-projectors. In his performances, recordings, and collaborations Jeck combines samples, loops and scratches from various analogue sources to create complex, highly involving and often moving soundscapes. He has released 4 albums on Touch since 1995. www.philipjeck.com

Born in 1975, BJNilsen has been active with experimental music since the early 90´s with various constellations. For the past 10 years he has been releasing albums on Touch, making music and sound for documentary film, television and commercials. He is focused on the sound of nature and its effect on humans, field recordings and the perception of time and space as experienced through sound, often electronically treated. He has also worked closely with Chris Watson on the project Storm, released in 2006, and a duet with Icelandic cellist Hildur Guðnadóttir. www.bjnilsen.info

Philip Marshall is a freelance print and digital media designer of eleven years standing. Working out of London, Paris and Berlin, Philip has collaborated for the past six years with David Sylvian and his art director Chris Bigg developing the Samadhisound website and artist sites, and again with Bigg on projects by Jóhann Jóhannsson for the legendary 4AD label. He has been designing online for Japanese fashion house Comme des Garçons since 2005. He is a participant in the Touch audio visual arts project, founded in 1982, and its sibling label Ash International, working closely with founders Jon Wozencroft and Mike Harding. Hands-on exploration of sound design was the natural extension of his work for Touch. www.philipmarshall.com