Release date: 30th March 2015
Artwork and photography is by Jon Wozencroft. The CD was mastered by Helge Sten [Deathprod].

stator (ˈsteɪtə) n
1. (Electrical Engineering) The stationary part of a rotary machine or device, esp of a motor or generator
2. (Aeronautics) A system of nonrotating radially arranged parts within a rotating assembly, esp the fixed blades of an axial flow compressor in a gas turbine
[C20: from Latin: one who stands (by), from stāre to stand] 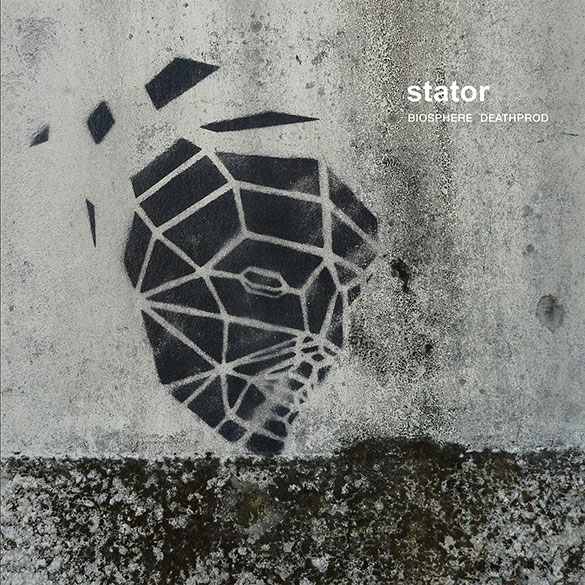 Biosphere is the main recording name of Geir Jenssen, a Norwegian musician who has released a notable catalogue of ambient electronic music.
He is well known for his “ambient techno” and “arctic ambient” styles, his use of music loops, and peculiar samples from sci-fi sources.

His track “Novelty Waves” was used for the 1995 campaign of Levi’s. His 1997 album Substrata is generally seen as one of the all time classic ambient albums [1].
Biosphere regularly performs live during electronic music festivals and in clubs throughout Europe and various other locales around the world. Live performances usually consist of Jenssen performing improvisations or variations on newer tracks on a laptop while video art is projected behind him; for example, full-screen video art was projected in his Picturehouse cinema tour in April 2006. Although these performances are rarely tied specifically to a recent album release, the uptempo material from the Bleep and Microgravity/Patashnik era is rarely featured in Biosphere performances.
He has been working with Touch since 1999…

Deathprod is a musical pseudonym used by Norwegian artist Helge Sten. Sten began creating music under this name starting in 1991, culminating with a box set of most of his recorded work being released in 2004. Simply titled Deathprod, the collection contains three albums along with a bonus disc of previously unreleased, rare, and deleted tracks.
On recordings, Sten is usually credited with “Audio Virus”, a catchall term for “homemade electronics, old tape echo machines, ring modulators, filters, theremins, samplers and lots of electronic stuff.”[1]

Sten also did the mixing of the album “PB” by the Norwegian artist Per Bergersen.
Sten is a member of Supersilent and works as a producer on many releases on the Norwegian label Rune Grammofon. He has also produced Motorpsycho and has worked with Biosphere on an Arne Nordheim tribute album called Nordheim Transformed.
Mastered by Helge Sten at Audio Virus LAB. This work was commissioned by Tape To Zero. Thanks to Kjetil Husebø.