Recorded in Berlin at Studio Schwedenstrasse one day in June 2010. Recording Engineer: Marco Paschke. Mixed and Mastered by Daniel Karlsson in Stockholm at Elektronmusikstudion.

Mika Vainio was a member of the legendary minimal electronic duo Pan Sonic. Emerging from the Finnish industrial and rave music scene in the early 90’s, they became one of the most important electronic music acts. Vainio’s solo works goes from abstract drone to minimal and experimental techno, under his own name or as Ø for labels like Touch, Raster Noton, Sähkö and Editions Mego. He has worked with Alan Vega, Keiji Haino and many others. His music is always extremely physical and present. Mika Vainio lives and works in Berlin.

Joachim Nordwall runs the iDEAL Recordings label since 1998, releasing intense electronic music of various kinds and organizing club nights and festivals around the globe. He started making electronic music as a teenager in the late 80’s in the psychedelic drone duo Alvars Orkester (Ash International), drifted off to sweaty avant garde punk rock with Kid Commando in the late 90s and formed the ritual rock and electronic drone group The Skull Defekts in 2005. He is also recording solo works under his own name and works with Mats Gustafsson, The Gagmen (with Aaron Dilloway and Nate Young), Mark Wastell and The Sons of God. Nordwall is based in Stockholm.

“Monstrance” is their first album together and is released June 2013 and consist of drone works and pulsating electronic minimalism but also guitar, acoustic elements, organs and metal percussion. It was recorded in Einstürzende Neubauten’s Berlin studio during an intense session in early summer of 2010. “Monstrance” is a place where Vainio’s and Nordwall’s backgrounds as musicians and composers meet, and something new and extremely powerful is born. Something deep, raw and direct…

END_OF_DOCUMENT_TOKEN_TO_BE_REPLACED

TO:87 – Bruce Gilbert and BAW “Diluvial”

Local preoccupations with rising sea levels fuel Diluvial – a work that dwells on the dynamics of flood geology and global warming; creation stories and climate change. Diluvial is an evolving soundscape and environment by Bruce Gilbert and Beaconsfield ArtWorks (David Crawforth & Naomi Siderfin). This work was initiated on the Suffolk coast for Faster Than Sound, Aldeburgh 2011 and then developed for a show at Beaconsfield, London later that year.

Taking rising sea levels as its theme, Diluvial imagines the world before, during and after the next great flood, referring to an ancient, ex nihilo interpretation of global warming. Field recordings from beaches in Suffolk and London, conceptual scoring, visual installation and sonic performance fuelled Diluvial’s evolving soundscape, alluding to the mythical seven days of Creation. Diluvial was a compositional collaboration in three iterations between Bruce Gilbert and BAW (David Crawforth and Naomi Siderfin).
Synthesised sound generated by Gilbert and Crawforth in response to Siderfin’s score and iPhone field research, was assembled over seven weeks into an electroacoustic composition: The Void, The Expanse, Dry Land, Lights, Creatures of Sea and Air, Beasts of the Earth, Rest/Reflection.

Bruce Gilbert is a founding member of the influential art-punk band Wire and a pioneer of experimental noise. He studied art and found a niche in the late 1960’s avant-garde music scene and continues to work as an iconic figure. He makes visual and sonic works in a range of media.

David Crawforth and Naomi Siderfin – Beaconsfield Art Works – have been collaborating on experimental solo projects since they co-founded Beaconsfield in 1994. Their art interventions have exhibited internationally and whether installation or performance, almost always involve sound.

END_OF_DOCUMENT_TOKEN_TO_BE_REPLACED 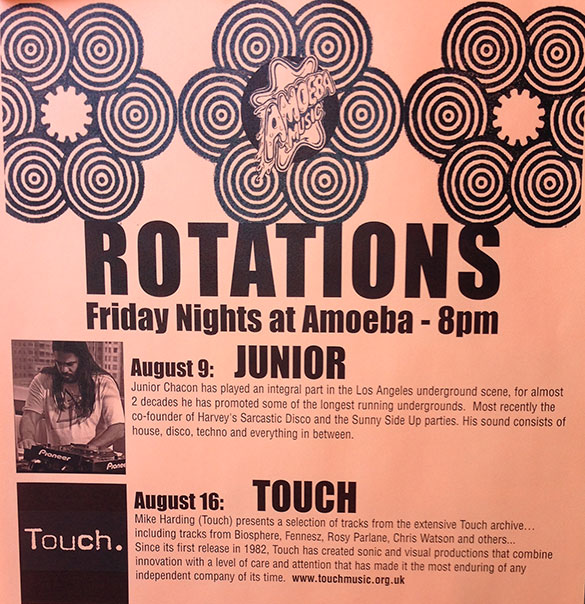 Mike Harding (Touch) presents a selection of tracks from the extensive Touch archive… including tracks from Biosphere, Fennesz, Bruce Gilbert, Hildur Gudnadottir, Rosy Parlane, Sohrab, Mika Vainio, Chris Watson, Jana Winderen and others…
Since its first release in 1982, Touch has created sonic and visual productions that combine innovation with a level of care and attention that has made it the most enduring of any independent company of its time.

You can view the playlists for the evening here

“Why, there they are both, baked in that pie;
Whereof their mother daintily hath fed,
Eating the flesh that she herself hath bred.”

A number of stories in Greek mythology involve cannibalism, in particular cannibalism of close family members, for example the stories of Thyestes, Tereus and especially Cronus, who was Saturn in the Roman pantheon. The story of Tantalus also parallels this. These mythologies inspired Shakespeare’s cannibalism scene in Titus Andronicus…

CREATE A SENSE OF PLACE

Geosonics is a colloboration between legendary field recordist Chris Watson and Soniccouture and Touch.

Hundreds of hours of recordings, from some of the worlds most extreme and inhopsitable enviroments, combine to form a library of rare sonic artefacts that cannot be found anywhere else.

Using this unique collection as a starting point, we created a wealth of sound design material – waves and textures which, when layered and combined with Watson’s original recordings, create the most fluid, organic soundscapes ever heard.

The product page where you can buy the instrument

Serve as a dip for tortilla pieces or corn chips or as a canapé spread. Makes 10 to 12 appetizer servings.