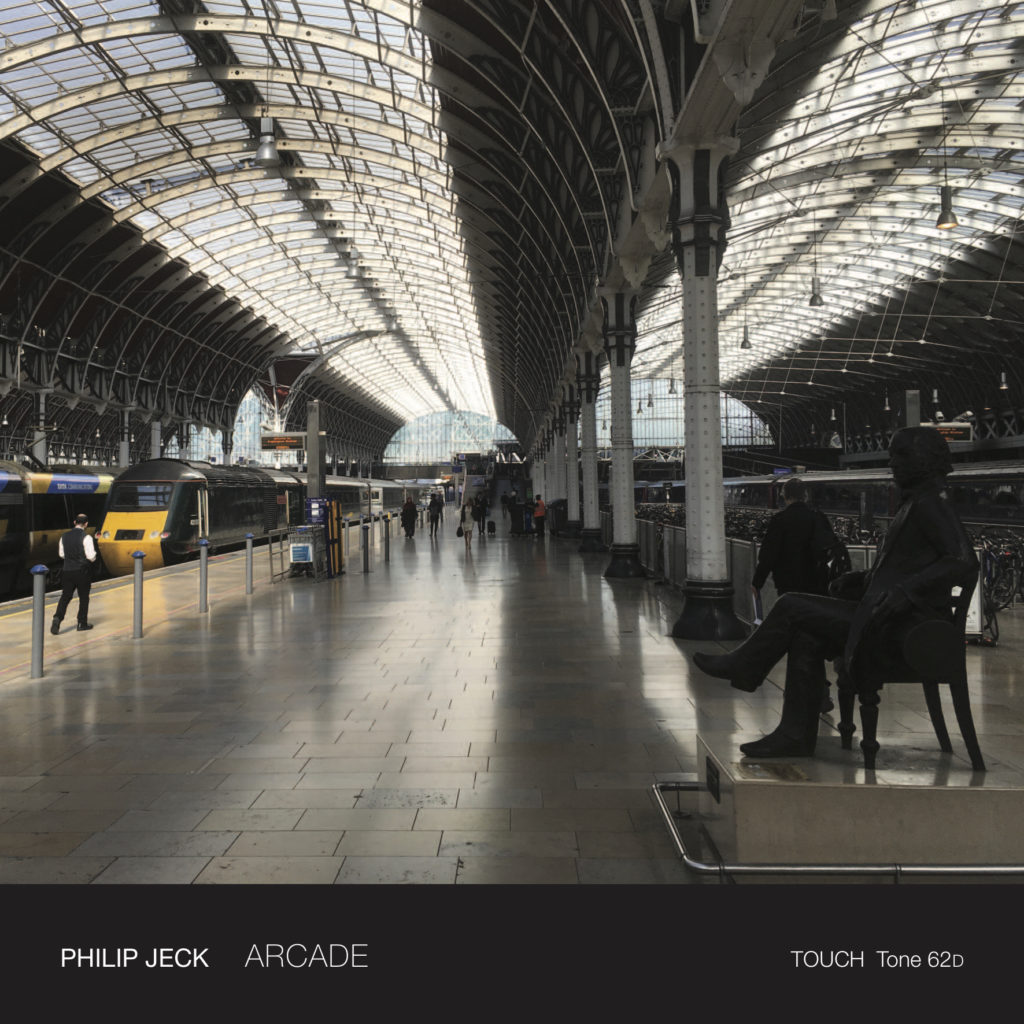 “Philip Jeck works with old records and record players salvaged from junk shops turning them to his own purposes.” For those of us who can’t imagine a more engaging biographical note, Jeck’s new 33-minute epic Arcade is a pure delight.

Recorded live at London’s celebrated Iklectik space in March, the piece features contributions from Yann Novak and Simon Scott. This is turntablism of the highest order.

Jeck has been making music with vinyl and electronics since the early 1980s. He started out (and continues to work) as a visual artist, studying at the Dartington College of Arts.

That southwest England institute has turned out an impressive list of graduates that includes Sonja Klaus, a set decorator, film art director and production designer, composer and political activist Lindsay Cooper, who also played oboe, bassoon and was a member of Henry Cow and composer/educator Patrick Nunn.

Each of this new work’s elements – and there are too many of them to count – evokes a time, place, feeling or a combination thereof. The work can be enjoyed equally en masse or as an audio mining exercise. Take it all in or pick it apart.

Its density is a significant part of its appeal. Arcade never overwhelms, but there is so much going on here. His application of surface noise may be most impressive.

Jeck uses the device more centrally than others. It’s not just louder that you may be used to, it sits at (or at other times near) the centre of the piece.

It’s a cliché to say that artists like Jeck use the turntable as an instrument. But there really isn’t any other way to put it. The fact that he plays these record players so imaginatively and with such a fine sense of their potential has a lot to do with why he’s such an important artist.

Don’t let this be the only Jeck title in your collection. [Kevin Press]

One mark of a true artist is a singular and instantly recognizable voice. By that measure, Christian Fennesz and Philip Jeck both qualify—no more than seconds of their respective material needs to be played for identification to be made—and if the world can be split into innovators and imitators, the Touch artists undoubtedly belong in the first group.

Though the single totals but seven minutes, Fennesz’s Station One indelibly captures the guitarist’s style in its two tracks, the first of which, “Tom,” first appeared on a 2014 Modeselektor compilation, and the second, “Silk Road,” (previously “Silk Lane”) was part of a 2016 installation in New York City. For the new release, both were remodeled, remixed, and remastered in Vienna earlier this year. A thing of luminous beauty, “Tom” sweeps in surreptitiously, its guitar strums shimmering within a drifting, synthetic mass before morphing into a fuzz-enshrouded swirl of guitar and electric piano radiance. The more aggressive of the two pieces, “Silk Road,” which apparently was played once in a loop for a whole day, buzzes and roars with machine-like insistence, alternating as it does with a loud, rippling thrum. Much like Fennesz’s work in general, neither of the pieces adheres to a rigid structure; instead, the two unfold like living organisms whose movements seem unpredictable yet nevertheless natural.

A long-form piece recorded live in London in early 2018, Arcade is quintessential Jeck. Using old vinyl discs and record players salvaged from junk shops, he crafts woozy soundscapes where ghostly loops push their way to the surface through thick fields of crackle, static, and vinyl surface noise. One might liken the experience of listening to a Jeck piece to drifting lazily on a barge and viewing the rusty ships and decaying industrial buildings ashore as they appear during the half-hour trip.

Strings figure prominently in this case, with the first violin flourish arising three minutes in and others swarming to the surface thereafter. As expected, nothing so conventional as a recognizable string quartet melody appears; instead, groans, corroded phrases, and high-pitched squeals ebb and flow within the slow-moving, undulating mass, while guitars twang insistently amidst clattering noise at the twenty-five-minute mark. As emphatic as Arcade is in such moments, it also includes passages so gentle and subdued they could induce sleep, and, in fact, midway through, breathing-like sounds emerge that could be mistaken for signs of light slumber. The setting never stays in one place for too long but rather shape-shifts with almost clockwork regularity, and consequently one’s attention never lapses during the thirty-three-minute presentation.

Anyone seeing Jack’s methodology and gear choice as gimmicky would be wise to attend more carefully; Arcade is as transfixing as anything else in his catalogue and attests to the singularity of his vision. [Ron Schepper]