TS12 – the next in the series of vinyl-only Touch Sevens [TS11 and TS13 to follow in 2011] – is Monad by Bruce Gilbert, whose career stretches back to late 1960’s British avant garde art & music scenes, and has since played an important and influential role with his involvement in various rock based formations, work for choreographic projects and art installations…

These freaking things, they are sent to torment me surely? Always too short to really unfurl round your mind, you are left trying to describe a pulse or a metallic whirr for 3-4 lines. I recently heard ‘The Shivering Man’ by this ex-Wirester and rather liked what I was hearing. This ‘Monad’ though? It’s an austere, dystopian double-slice of brittle electro minimalism if ever I heard one! This is so not a party starter. The thing I like most about the ‘Ingress’ side is the throaty electronic echo, like the heartbeat of a machine, then you get the panning cyborgian scree but my favourite bit is surely the demented drunken disembodied w(h)irring in the far background. ‘Re-edit’ is basically a knuckle sandwich of monging, slightly highly-strung frequencies having a maudlin sing-a-long. Probably to commemorate another machines death from too much ink and data leakage. This record is quite an eerie little bastard. Does that mean I like it? Erm….yes, actually, I do.

I was really looking forward to this release, I have to say. There is something about deeply experimental music being released on a 7” single that for some reason really appeals. I think it’s because the 7″ is so ordinarily suited to the ‘pop’ track that to hear anything other than pop music on a 7″ is quite exciting. Touch’s Sevens series has included short releases by the likes of ex-Cabaret Voltaire sound recordist Chris Watson and Pan Sonic’s Mika Vainio. Bruce Gilbert’s association with the label goes back many years, with albums like The Haring getting released on Touch (it was subsequently re-released by WMO). More recently the ex-Wire guitarist – as part of the group Souls On Board – took the B-side of a live split album with Savage Pencil (Melatot / Souls On Board, released on Touch sub-label Ash International). Monad is housed in a sleeve designed by Jon Wozencroft (as are most Touch releases) and lists out the instruments and tools Gilbert used boldly on the front (Korg Monotron Analogue Ribbon synth, Zoom RFX-200, Korg Kaos Pad 2, Apple GarageBand); there’s also a diagram by Gilbert himself on the back.

I looked up the definition of the word ‘monad’ and its meanings vary from being a small, single-celled organism, to – according to Leibniz’s metaphysics – an indestructible entity that is the ultimate fabric of the universe. This confusing word has little bearing on the two tracks included on the single, unless they refer to the songs as being solid and reasonably impenetrable soundscapes or their short duration (at 45rpm both are around two-and-a-half minutes long apiece).

‘Ingress’ is a dense drone whose layers are not immediately obvious unless you really concentrate; if you listen deeply you will pick out the various shifts in sound across the piece’s length, the changes in tone and the rich tug of the bass drone. The best way to describe ‘Ingress’ would be as an approximation of what loading tapes into a ZX Spectrum used to sound like, only this is more measured, more deliberate and more ostensibly ‘composed’ than that noise.

Over on the B-side, ‘Re-Exit’ is less constant, consisting of a throbbing, echoing bass loop offset by buzzing noises and a phasing, quiet drone out in the background. The bass loop provides a rhythm of sorts, but in essence its more of a thick pulse. It’s a style that Gilbert has deployed a number of times, both in his solo work and also with Graham Lewis as Dome. In it’s own, pretty sinister way, it’s beautiful. [MJA Smith] 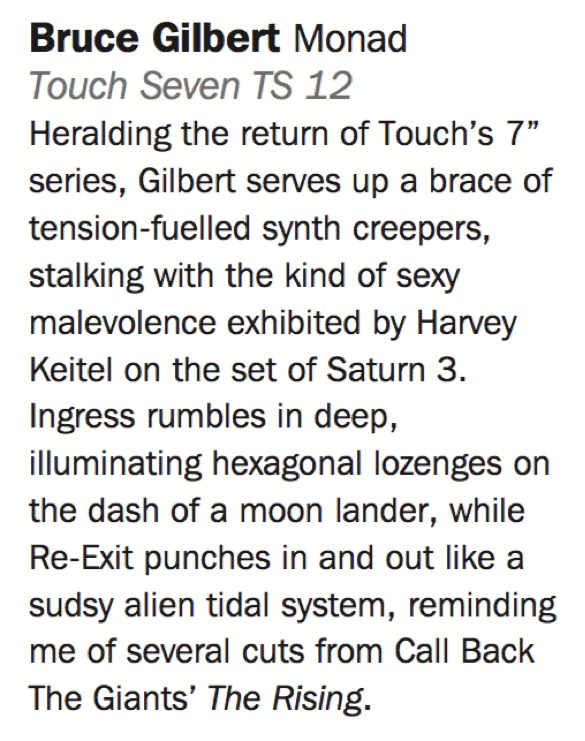