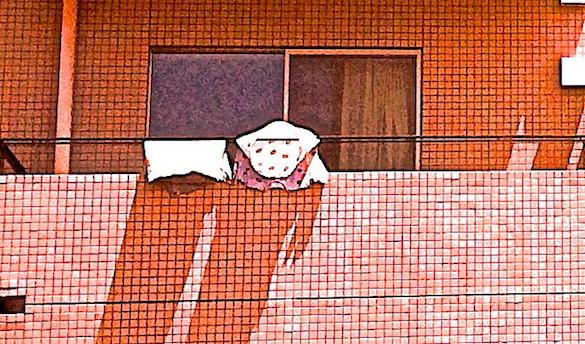 1. A processed recording of my shower in Tokyo last year. I’ve made three passes, and this is the first. All I’m doing is changing the eq. Mistakes and all. There are no mistakes. It’s an idea.
2. A music cue for a Chinese Science fiction film. This includes a recording of my shower in Tokyo and a clock from the Museum in Manchester Square, London Town.
3. Teddy. A North American porcupine eating corn on the cob. Recorded from the internet.
The live recording of my shower in Tokyo last year. Unprocessed. I’m more interested in the drain, I feel. A bit like peeing, but not.
4. A walk a few weeks ago around the square in Agua Amaga, Spain. First we’re outside the  resteraunt in the square with two girls rehearsing a song together. Oh yes, then walking towards the beach, but some kids are playing electronic darts in a bar. Down to the sand now and the sea. Crowded again this year, so we don’t swim here. Water isn’t as clean as it used to be. Up the beach and I meet a dog. Back to the square. Girls still singing, and I head off home to the apartment and sit on the roof.