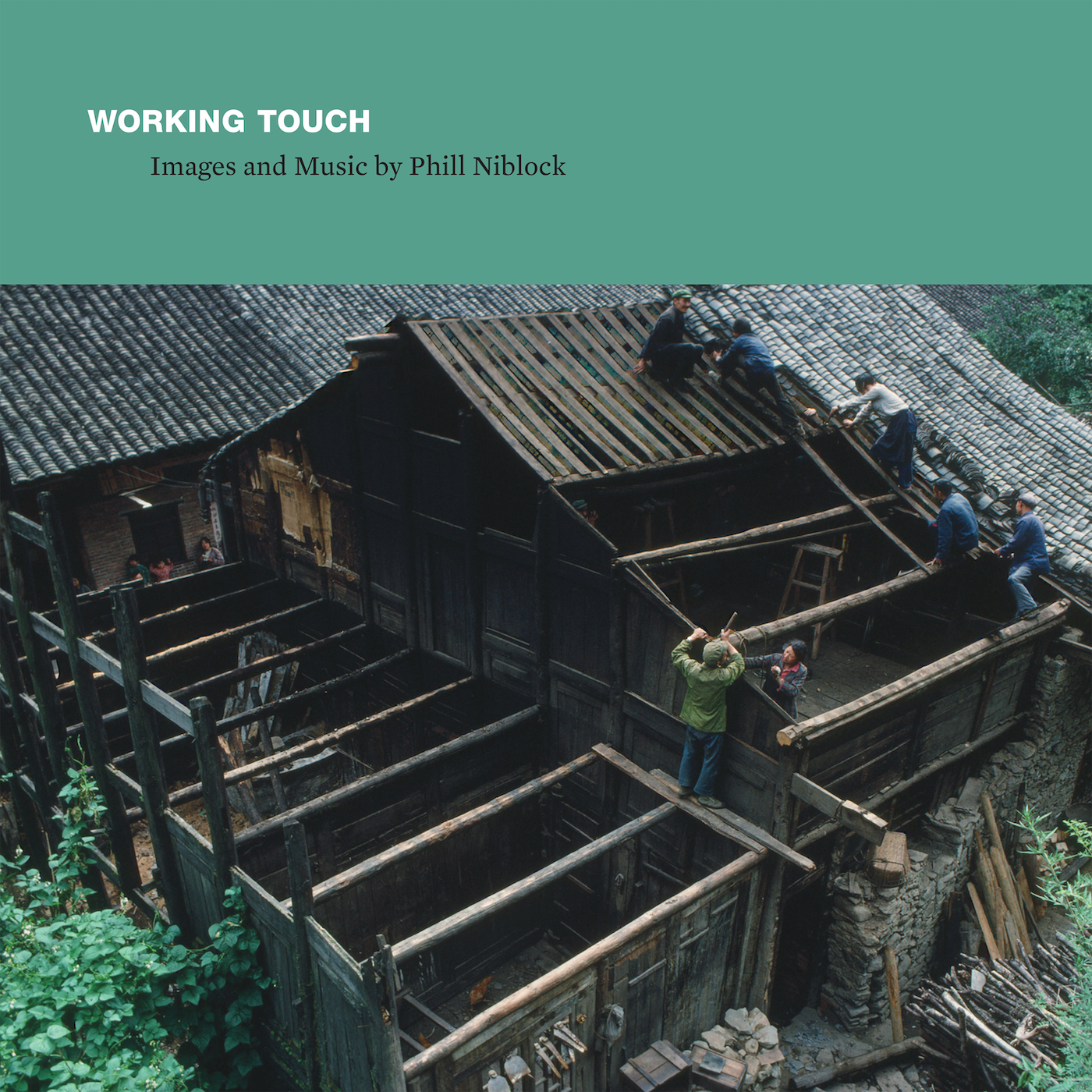 This USB stick packaged in a digipac is now available to order from:

North America – from Forced Exposure
Rest of World – from Soundohm

Music composed/created between October 2013 and February 2016

The music is eleven minutes longer than the film length, so the last music piece is faded at the end of the film, but is complete in the music files which are on the USB memory stick in 24bit, 44.1kHz.

You will note that the music notes say – “material recorded . . .” These pieces are all for one and two instruments, where the composer and musicians went to a studio and recorded (generally) mono tracks of the notes which are later used by the composer to build a multitrack environment of up to 32 tracks, and to make many microtonal extra notes which are added to the original recorded ones.

Phill Niblock travelled to China and Japan and other places in the world, from 1973 until 1991, specifically to film material for China88, Japan89 and other pieces. He was accompanied by an interpreter to facilitate contacts with his subjects. They did not make arrangements in advance, but travelled into the countryside in a university van in China and in a rented car in Japan, stopping the vehicle when Niblock saw something suitable for filming. At that point he immediately assembled his bulky camera and tripod and began, relying on his companions to explain what he was doing if necessary. There was little, if any, resistance or curiosity. Remarkably, almost none of the subjects in his films pay attention to or even seem to notice the camera. His explanation is that they were busy working (as we can see) and also because they considered him to be equally engaged in work.

Here I refer to the overused John Cage aphorism proposing a disconnect between composing, performing and listening. In the case of filmmaking, it is more apt to divide the three activities into conceiving as one thing, executing another, and viewing a third. “What can they have to do with one another?” as Cage asks. “Plenty!” is my answer after viewing and thinking about Phill Niblock’s films, but the connections are far from straightforward. In terms of conception, Niblock says that he conceived The Movement of People Working film series because he couldn’t afford to bring a dance troupe with him to his international performances and exhibitions. From this admission, a viewer can extract a hint as to what to look for – not labor in and of itself, not labor as productive and goal-driven, but labor as movement. It accounts for the emphasis in his films on manual labor, which frequently consists of trained, deliberate and even rhythmic repetitive motion. Labor as choreography.

As for execution, there is a strong match between the general title of the series and what was required to shoot and edit the films. A major proportion of the original material is in the films, with only flash frames between shots removed from the workprint, which was used for screening. So the preparation of the film for projection (find end of shot, cut out white frames, tape splice ends) was time-consuming, repetitive, and minimally creative, but ultimately productive ― a corollary to the repetitive labor seen on screen. Another bout of repetitive labor was necessary after the workprints had been transferred to digital files, this time using an editing application to remove the glitches caused by the tape splices riding through the film transfer apparatus. One way to understand the project is in the labor required for its production, and identification of the filmmaker with the working men and women portrayed. But this is too simple and open to obvious objections on social and political grounds.

The People Working films rarely if ever show the result of the labor recorded: no woven baskets, no fish dinners, no plowed, seeded or verdant fields. Laborious repetition without results is not a recipe for a great viewing experience. What then is the effect of these films? How is a viewer to comprehend them, to react to them? What mindset is it appropriate to bring to a screening? Without a temporal architecture, a development in time, without sign posts or maps real or metaphorical, without time markers, or indications of the filmmaker’s presence: they are neither a record of the artist’s travels, nor anthropological field data.

But they do mark out a specific aesthetic territory.

Phill Niblock’s music and films contravene the drive of local memory and anticipation integral to much musical and cinematic experience, the sense that each moment is conditioned by what directly preceded it and what came before that, while simultaneously pointing forward to resolutions or further complications, driving toward closure, always toward the sense of an ending in which all threads are tied, all paths satisfactorily closed. This conception of temporality is fundamental especially to pre-20th century Western music, and basic to both conventional narrative cinema and even advanced artists’ moving image works.

But the moment-to-moments of China88 and Japan89 do not point to endings. The subject of each film is consistent ― recordings of the labor of working men and women, often engaged in activities that have not changed much in a millennium or two ― but each shot is independent. Experiencing the films can be compared to bodily sensation, to which concepts and generalizations never quite fit. Words cannot capture and communicate the twinge or tang of pain, the flash of sudden bright light, the oomph of an explosion, the sizzle of orgasm. It is not that these felt sensations come and go in an instant ― they may continue, or stop and start, but words don’t convey them, won’t pin them down, like a scrap of paper sliding off an oily pipe. Sensations stick in memory not as experience but as re-conceptualized and fixed by emotion-names, but the concepts and names never really stick to them. This may be the source of Wittgenstein’s insight that there cannot be a private language and Kant’s distinction between affect and emotion. The experience of Niblock’s film is closer to affect than emotion, more sensation than concept.

The films, I suggest, require a suspension of expectation, the viewer opening himself/herself up to an experience of delight in color, in scale, rhythm, in the unfamiliar; in the visual arrangement of shaded planes on a flat screen surface that simultaneously depicts figures in recessive space. The films demand an embrace of a continuous presence, with future and past fading into irrelevance as they recede from and come into being. Only the present has import. Conventional cinematic concepts like closure, montage, and development are out of play. It is the joy of the moment based on the hypnotic magic of the recording of motion, of sound, of time – relatively recent achievements in the long history of human technology.
How is this sense of continuous presence triggered?

Almost all the images in the films are shot under the aesthetic demands of still photography, presenting the scene so that an entire world seems contained in the frame. Since Griffith and Eisenstein the cinema frame has been designed for the edit. An actress looks off-screen, out of the frame. What has captured her attention? Whether the following shot shows what she is looking at or not, the tension in the original frame objectifies an absence, demanding an answer. A close-up fragment asks the viewer to imagine what is omitted, the absence to be confirmed or denied by later images. An action scene is another example, assembled from rapid details, none of which makes sense or is of interest when extracted from the sequence.

The photographer’s vision is the obverse of the cinematographer’s. Everything that matters is in the frame, the frame designed so that its elements are in balance, and when the gaze wanders to the frame line, the planar arrangement of the composition returns it back into the picture. “A world in the frame” is the photographer’s motto. Niblock composes his cinema frame photographically, but unlike a photograph the rhythms and motions of repeated actions are also within this complete world. A viewer switches from looking at to looking into the projection and back again. We revel in the present.

On the other hand, there is much development within an individual shot. Take for example the shot that begins at 38:03 in China.

Bales of hay randomly arranged but defined in the spatial layout of five figures roughly arranged in a receding circle in the depicted space, an ellipse on the screen plane. One is simultaneously aware of both the flat screen and the recessive space it depicts. The closest (and largest) figure is seen only as an off-white shirt back, the furthest (and smallest) a pith-helmeted head. A flash of white sky in the upper right provides a balance to the granola-colored densities of straw bales. The plane of the screen is elegantly divided, in an almost perfect layout, and, as a model of good photographic composition, and the viewer is confined within the layout. Soon some movement: the camera moves down and left, following the white-shirted figure, to discover a rose pink-shirted back, the pink playing against the now mustard straw color of the bales, in the deliberate color palette of an Alex Katz or Matisse. The screen rearranges itself dynamically, revealing a slotted ladder up the mound of bales. Colors and forms are in harmony, offering the purified visual pleasure of the screen plane independent of the subjects depicted. But now one is aware of the heft of the bundled straw as the man hauls himself up the ladder, one bale in his arms. We feel its weight, and now the camera has shifted subtly once more, the man, the ladder, the bale and background are isolated. The camera follows him and there at the top of the frame, against the sky, revealed in a echo of the first part of the shot, three men, tiny heads really, watch him and wait, giving a sense of the social distinctions in the scene, the single laborer and the three managers or supervisors. It is a small event-filled sequence, like a miniature narrative film, offering substantial sensual and cinematic satisfaction. The worker delivers the bale, tossing it over and over, under the eyes of the three watchers. A stand-alone 39 seconds. A cinematic aria, elegantly delivered. Bravo!

Niblock’s practice is to run to several of his films simultaneously, his music playing at the same time. The atmosphere generated is conducive to the sense of continuous presence, where sensation rather than concept, affect rather than emotion, govern the experience. Once a viewer/listener yields to this approach, the image, the sounds ― the combination is deep and compelling. – Grahame Weinbren