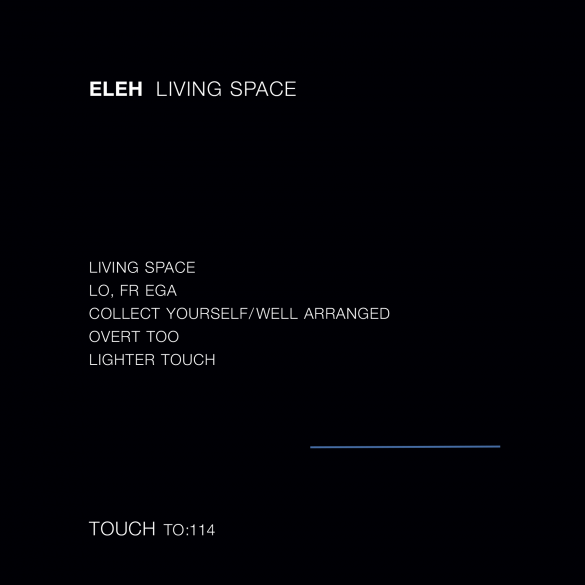 Following ‘Slow Fade for Hard Sync’ (2009) and Location Momentum (2010), Living Space is Eleh’s third physical release for Touch. Seven years in the making, this new release consolidates the artist’s parallel narrative between a series of vinyl and CD releases for Important Records – where the emphasis is on a minimalist aesthetic – to a visual counterpoint that hints at the cinematic and painterly qualities of the music.

Sound, as a healing force, is an idea as old as the medium itself.  Inspired by the legacy and above all the spirit of John Coltrane, Living Space features 5 new compositions that seek to express the beauty of slow change, not only through the microtonal shifts in sound that Eleh navigates but moving with the atmospheric and shape–shifting conditions that the music creates as it interacts with the listening space, whether bedroom or concert hall, each one of them unique.

If the ambition of Living Space is to reflect both personal and collective growth cycles, the experience of its audition has the effect of stopping time. Melodic and harmonic progressions are implied and not stated obviously, to enable listeners to apply their own emotions and feelings to the music.

In counterpoint to the music, the 60 minute CD is presented with a 6-panel digifile with Jon Wozencroft’s water photography extending the meditational pull of these new compositions. The Touch bandcamp page, which will be up later in the month, presents a fuller documentation of this photo–shoot (from Crete, 2018), with a 20pp PDF free for download.

For those for whom Eleh needs no introduction, see if you agree. Anyone who has yet to experience the artist’s sonic alchemy, Living Space is the perfect starting point.

Living Space (TOUCH TO:114) is the excellent new record from Eleh, the mysterious London electronic musician who works very hard to maintain his low profile and generally won’t be drawn out about his work. We can only applaud this attitude, and I find that in the majority of cases I warm to creators who eschew the limelight and shrink from attention-seeking.

We heard from Eleh in 2010 with the very fine Location Momentum record, his second for Touch (this is his third), and noted then as we do now that the majority of his output can be found on Important Records in the USA, often in print runs of about 200 copies or so, and usually available by mail order only. Eleh could well be the kind of entity that inspires a devoted following, much like that other reclusive and highly prolific creator of hermetic drone music, Organum. Living Space could be characterised as “minimal analogue drone” for sure, but there are a number of nuances and special aspects that one must be attentive towards.

One of these, and it ought to impact you as soon as you play the record at appropriate volumes, is the judicious use of bass tones, These will produce physical reactions in your body that you won’t regret; sound as a physical force, which seems to be doing more than just entering through your ears. There’s also the interest in occupying the dimensions of the room where the record is played back, something Eleh seems to do with such focus and determination that it’s almost scary; it’s not an invasive force, but it’s certainly not taking no for an answer. I’ve never seen a live Eleh performance, but I would hope he could fill any given venue with his benign tones which, in no time at all, appear to have volume, shape, and weight. I read in the press release that there are also claims made for “healing music” and “the effect of stopping time”, both of which are plausible at some level; less convinced me by the notion of “applying your own emotions to the music”, which is something you could say about virtually all music; but it does reflect on the “blank canvas” dimension of this Eleh record, which apparently is not unintentional.

There will be a vinyl edition of this release, but the label say they’re only producing it to cater to the fetishists; the CD edition is how Eleh prefers to present it. Superb package, and probably not cheap to produce; good quality cardstock, six panels, the interiors used to present Jon Wozencroft’s colour photographs of water. Very good. From 20th September 2019. [Ed Pinsent]

Housed in a gorgeous jewel of square packaging that opens to various aquatic shades, this is the latest from Eleh with his first new output on Touch in nine years, though his work has been represented by other fine labels (Important, Line…) over the course of the intervening years. And for good reason, the sound is indicative of how advanced and central tone itself has become to his work in the past dozen plus years, coursing through this with considerable fluid nuance.

The tonal bent and assorted reverb has a narcotic effect, not unlike going into a dreamstate under the scope of anaesthesia or a strange drug trip. This is subtly massaged into the barrier of unconsciousness on the incredible Collect Yourself/Well Arranged. If one were to try and take apart it’s title as a construct, the ‘living space’ inferred here could be supplanted for that of an inward stare at the human body as a host in and of itself. The pulsations used here easily auscultate to those electric signals of internal organs resembling sci-fi transmissions on the surface.

His oscillations, gentle over these passages, elongate and compress over time, like blood pressure and heartbeat (as well as a futuristic pressure chamber protected by indestructible laser beams). But the record doesn’t play on the parenthetical, the melodramatic or on the obvious, instead making you relax and think simultaneously. Living Space is a collection of five tracks that coax dynamic wonderment. It’s mystery is its majesty. With each benevolently ascending modulation the listener may be imagining themselves either suspended or rotating ever-so sluggishly into the abyss, into oblivion.

Eleh’s work, especially here, is progressive ambient sans any hard borders. This would serve well to watch cloud formations by, drift off into a sublime sleep concert, or simply open to the chimera in your immediate surroundings.

Eleh‘s discography boasts no less than 32 albums since 2006 – solo works as well as collaborations with artists like Pauline Oliveros, Ellen Fullman, Christina Kubisch, Caterina Barbieri and Richard Chartier. And until now he managed to remain completely anonymous: no one (well almost no one) knows who he is.

Living Space is the third Eleh release for the Touch label. It’s a perfect title: the sound of these tracks seems to come from everywhere but the speakers. It moves inside your head and moves around in the room it is played in, thus making the space come alive.

It is released on CD, which is the format ‘how the artist wants it to sound’, but nevertheless Touch promises a vinyl edition”for fetishists” to follow in the new year. Let’s hope ‘the artist’ is OK with that, because I’m afraid the extreme low frequencies in this music probably won’t behave very well on vinyl. This music is, indeed, created for optimal reproduction via digital media.

Apart from one shorter track, all tracks are from 10 to 15 minutes in length. Eleh uses modular and analogue synthesizers, piano, organ, bass, and symphonic chimes to create his compositions.
Music that “seeks to express the beauty of slow change, not only through the microtonal shifts in sound that Eleh navigates but moving with the atmospheric and shape-shifting conditions that the music creates as it interacts with the listening space, whether bedroom or concert hall, each one of them unique.”

I would call this ‘minimalist drone music’, but that ‘minimalist’ only refers to the musical aspect, not the sound itself. With all those different frequencies bouncing around before they reach you, we might as well call it ‘maximalist’. Trying to describe music can be só confusing…

The CD-release comes in a 6-panel digifile with beautiful photography by Jon Wozencraft [sic]. 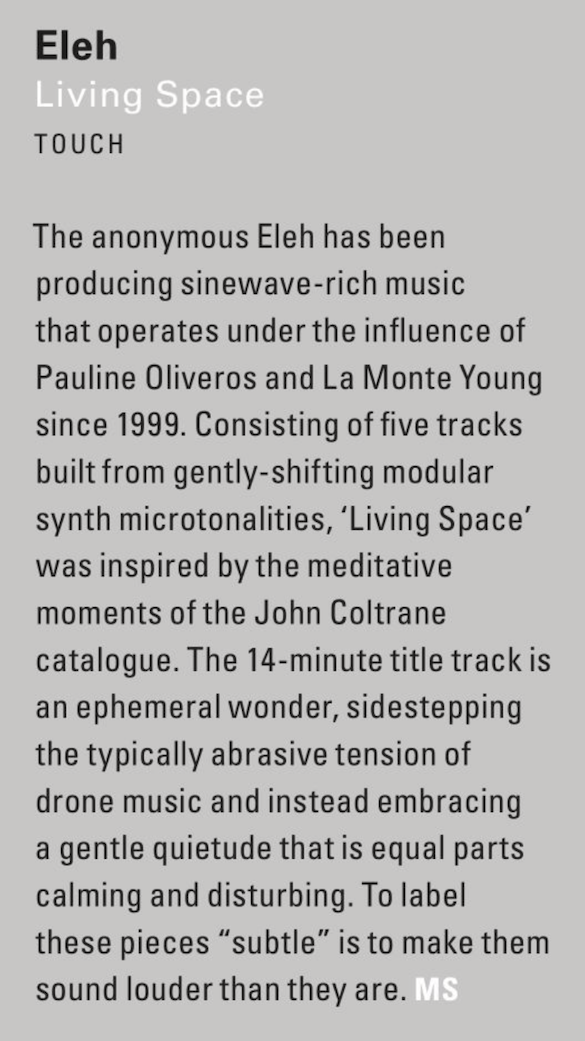 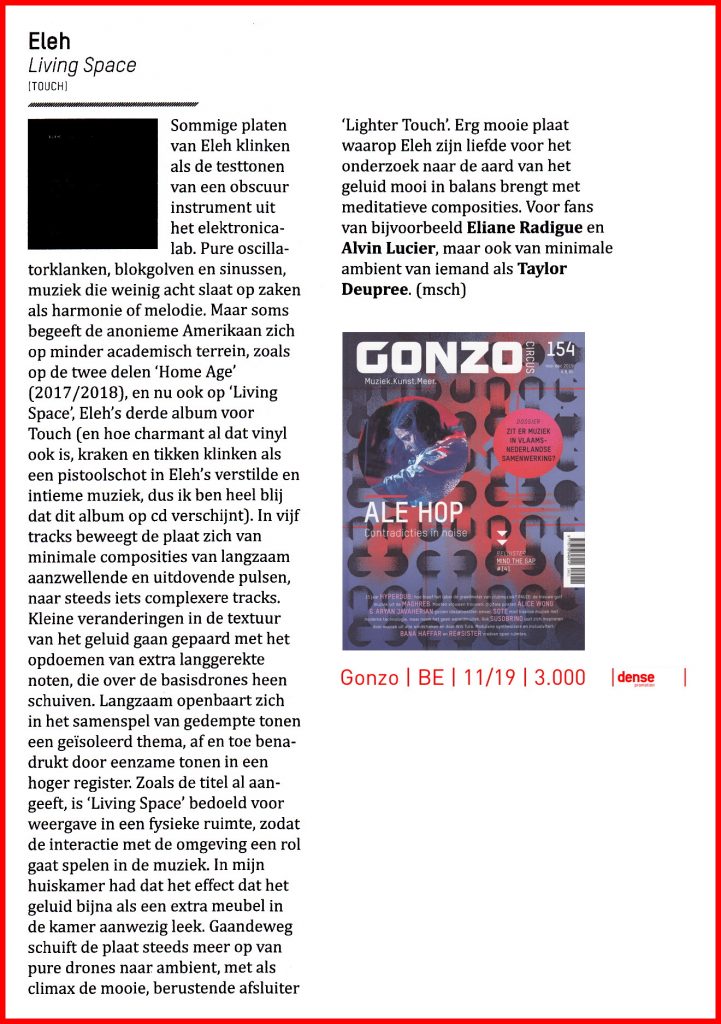