adv. 1. (Mus.) In a soft, tender, amatory style.
Charles Matthews plays the Grand Organ in York Minster, during Spire Live [http://www.spire.org.uk] on 20th January 2007. This release is a homage to Arvo Pärt…
Arvo Pärt is often identified with the school of minimalism and more specifically, that of “mystic minimalism” or “sacred minimalism”. He is considered a pioneer of this style, along with contemporaries Henryk Górecki and John Tavener.

About the players:
Charles Matthews: “I felt you were pure music, not human flesh, music through time, music played from the Universe, without boundaries.” [an audience member, July 2007] Born in 1966, Charles Matthews studied at the Royal College of Music, London, and was an organ scholar at Trinity College, Cambridge. His teachers have included Beryl Tichbon, Gwilym Isaac, David Pettit, Patricia Carroll, Nicholas Danby, Charles Spinks and Dr Richard Marlow.

Charles pursues a varied career as pianist, organist, composer and teacher, performing and broadcasting for radio and television within the UK and internationally. He has won numerous awards, perhaps most notably the first prize in the 1999 Franz Liszt Memorial Competition in Budapest. His recordings have been issued by Olympia, Priory, Guild and Touch; he is the organist for the Touch project, Spire, which also includes Christian Fennesz and Philip Jeck.

Christian Fennesz: Fennesz uses guitar and computer to create shimmering, swirling electronic sound of enormous range and complex musicality. “Imagine the electric guitar severed from cliché and all of its physical limitations, shaping a bold new musical language.” – (City Newspaper, USA). His lush and luminant compositions are anything but sterile computer experiments. They resemble sensitive, telescopic recordings of rainforest insect life or natural atmospheric occurrences, an inherent naturalism permeating each piece. He lives and works in Vienna and Paris.

Philip Jeck: Philip Jeck studied visual art at Dartington College of Arts. He started working with record players and electronics in the early ’80’s and has made soundtracks and toured with many dance and theatre companies as we as well as his solo concert work. His best kown work “Vinyl Requiem” (with Lol Sargent): a performance for 180 ’50’s/’60’s record players won Time Out Performance Award for 1993. He has also over the last few years returned to visual art making installations using from 6 to 80 record players including “Off The Record” for Sonic Boom at The Hayward Gallery, London [2000].

Philip Jeck works with old records and record players salvaged from junk shops turning them to his own purposes. He really does play them as musical instruments, creating an intensely personal language that evolves with each added part of a record. Philip Jeck makes geniunely moving and transfixing music, where we hear the art not the gimmick.
7″ vinyl was the quintessential format for popular music. Today, it is an undervalued and mostly promotional medium, used as a fetishistic signpost to a time of musical authenticity and a “healthy” popular culture. It might seem like another retrograde step to launch a vinyl series just as the download format threatens to dominate, and indeed there is an element of “the rear view mirror”… the generation of Touch artists who grew up with vinyl [and cassette] still feeling a strong emotional attachment to it. This series is more than that… an overtly critical, non-digital statement is supported by treatments of audio work which cannot be applied to digital formats – the sonic texture, the use of a locked groove, the A & the B and the additional dimension of the visual counterpoint. As for the aspect of audience participation, we choose not to specify the RPM on the label, encouraging the listener to experiment with playback options and personal preferences. An attempt to make music that works at both speeds. The front cover might actually be the back cover…

Touch released a few 7″s back in the mid to late ’80s, but they’ve just recently begun the Touch Sevens series. The first release in the series (by catalog number, anyway) features two of the label’s most acclaimed artists, Christian Fennesz and Philip Jeck, collaborating with organist Charles Matthews. The record is inspired by the “sacred minimalism” of Arvo Part.

The cover of the record shows a picture of the grand organ at York Minster, which Matthews played at the Spire Live event in January of 2007. This recording is interpreted by Fennesz on the A-side, who largely keeps static and distortion to a minimum until around the middle of the track, and even then, the flanging and distortion effects are used in a subtle manner. The piece seems to act as a showcase for the beauty of Matthews’s organ playing more than anything else.

Jeck’s side, however, is pretty much the exact opposite, piling on plenty of distortion and static, and cutting up and rearranging its source material. The piece has sort of an early industrial feel to it. It’s a bit chaotic, but no less stunning than the first side.
Both sides are playable at any speed, as there is no specific instruction as to which speed is correct. Both sides also end in locked grooves, but for some reason my turntable automatically picks up the needle instead of letting the record keep playing.
Anyway, as brief as the record is (each side is about 3 minutes), it’s certainly an excellent one. It’s also limited to 1000 copies, so it’s worth picking up sooner rather than later. 9/10 [Paul Simpson]

A third magical instalment in the Touch label’s 7″ series, Amoroso pays homage to the so-called ‘sacred minimalism’ of Arvo Part, and features a trio of collaborators: Touch mainstays Christian Fennesz and Philip Jeck are joined by renowned organist Charles Matthews, a performer who first contributed to the Touch label via the Spire project. On the A-side ‘Christian Fennesz plays Charles Matthews’, and does so in an extremely beautiful, harmonious fashion, treating the original organ recording with reverence befitting its setting (York Minster no less). You can barely detect Fennesz’s guiding hand until a surge of granular eruptions flood into the music halfway through the side, lifting the organ from the fixture of the corporeal realm, and into subtly more esoteric surrounds, a process we’re used to hearing Fennesz’s guitar undergoing. It’s really a thing of quite immense beauty. On the B-side, Jeck is less delicate with Matthews’ performance, colouring it with grit and flecks of coarse analogue noise. Importantly you can still make out the intervals being played, but the experience is a far more bracing engagement with the timbres of the organ, which are here reconditioned to instil a certain amount of divine terror – this is probably the sort of fiery, visionary retake on sacred music William Blake would approve of. Sublime stuff, and another essential purchase from Touch.

Christian Fennesz and Philip Jeck refashion the music of Charles Matthews (who joins them in the trio Spire), in particular a recording of Matthews at the grand pipe organ at York Minister Church – the formidable wall of tooled metal and wooden cabinetry depicted on the front cover. Fennesz’s treatment grows from solemnity with a mid-track series of melodic counterpoints to the piece’s apex, adding a pitch of desperation and longing to the constancy of the source instrument. By comparison, Jeck’s composition is heavily processed, feeding back a shifting set of monolithic timbres atop the organ itself, transforming its sound almost completely, and reminiscent of the treachery on display in some Tangerine Dream soundtracks (spiritually I’d line this one up against Sorcerer). Great offering in a series that continues to do unexpected, worthwhile things with the seven-inch single. 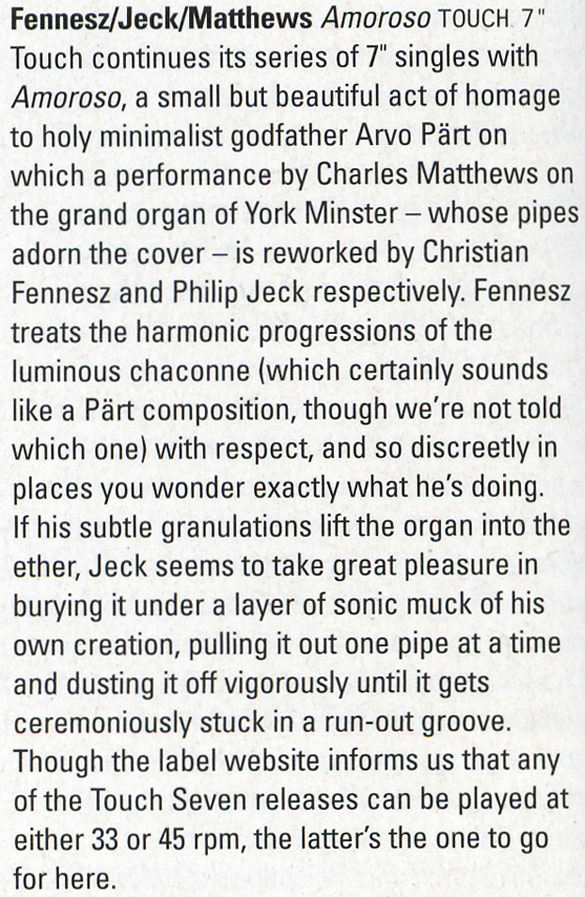