Tie Luo Han is a Chinese Oolong tea of the Wuyi Rock tea family. The name translates to Iron Warrior Monk, because it is believed that it was created by a powerful warrior monk with golden-bronze skin, hence the cool kung-fu movie-like name. This is one of my favorite teas. I drink it a lot. Although it’s a mid-priced tea (100 grams is usually around $30, although the price has risen in the last years) I like it better than teas which cost twice more. It’s easily available from online tea shops.

Tie Lup Han has a strong full-bodied taste, with a rich and smooth aftertaste. It works well with food, but the aftertaste will be somewhat lost, so for the full experience drink it on its own. It’s one of the teas which I can drink any time of the day. 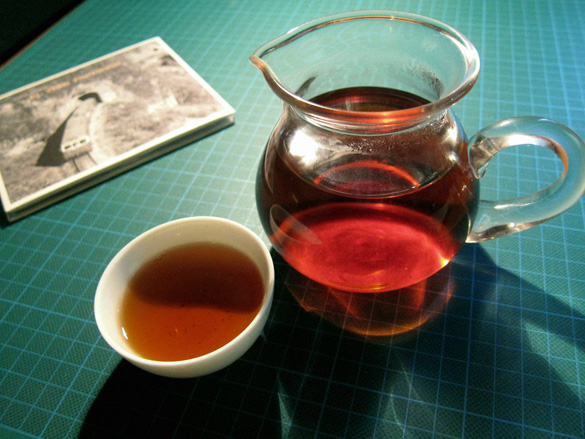 Here’s how you prepare it:

Tie Luo Han is a loose leave tea. No tea bags, so you’ll need a bit more utensils than just a big cup.

If you have tea clams which you use for loose leave tea: throw them in the garbage. Tea clams is an abomination. The difference between bag tea and loose leave tea is that the loose leaves are bigger. They need space to swell. With a tea clam you’re putting them in jail and reducing the full effect. Use a pot (clay or glass, either is fine) or a Gaiwan.
Like other Oolong teas it’s best to brew Tie Luo Han at 90°C. If you don’t have a temperature-specific water boiler just let the water boil up and then cool for a few minutes. Never let water boil excessively – it’s the oxygen which provides taste to the tea. Dead water = dead tea.  The amount of tea is difficult to say. It depends on the size of the pot. Usually about 1/3 of the pot covered by tea (in dry condition) is a good rule. The amount of tea affects the brewing time. After a few times you’ll get a feel for it.

The first brew you throw away and don’t drink. This is to ’wash’ the tea of possible toxins. It also decreases the caffeine levels (80% of the caffeine is released during the first 30 seconds of brewing).

The second brew is the first you drink. Let it brew for approx 30 seconds. The tea should get a light brown colour. Not dark like black tea, but darker than green and white tea.   Pour it into a pitcher from which you pour into the drinking cup(s). Use small drinking cups. It may not look as butch as your big red Manchester United-mug, but the tea will taste better. You should slurp. It adds oxygen and thus more taste.

For the third round let it brew for about 60 seconds. And for the forth and fifth add 15-30 seconds each consecutive round. The third brew is often the best. Your mouth is accustomed to the taste so the tea takes on a drier quality.

Tie Lou Han is good for about 5-6 brews.