My meat shall all come in, in Indian shells,
Dishes of agate set in gold, and studded
With emeralds, sapphires, hyacinths, and rubies.
The tongues of carps, dormice, and camels’ heels,
Boil’d i’ the spirit of sol, and dissolv’d pearl
(Apicius’ diet, ’gainst the epilepsy):
And I will eat these broths with spoons of amber,
Headed with diamond and carbuncle.
My foot-boy shall eat pheasants, calver’d salmons, 5
Knots, 6 godwits, lampreys: I myself will have
The beards of barbel 7 serv’d, instead of salads;
Oiled mushrooms; and the swelling unctuous paps
Of a fat pregnant sow, newly cut off,
Drest with an exquisite and poignant sauce;
For which, I’ll say unto my cook, There’s gold,

[from The Alchemist, first performed in 1610]

Ingredients
smudge (sage, cedar, palo santo, eucalyptus, frankincense, or whatever you have on hand)
loose tobacco

Method
1. Light smudge until smoke is released
2. Slowly waive smudge around body starting with the head, down chest, around arms, moving towards the toes, ending with soles of the feet
3. Place pinch of tobacco into palm of right hand
4. Turn and greet each of the Four Directions, the Earth and the Sky
5. Give thanks to the Four Sacred Elements, the Water, the Air, the Fire, the Earth
6. Coalesce intention into tobacco
7. Release tobacco onto the ground

10th October 2019 » Permalink: The Minister of YARG’s Of Nettle Cheeſe

If you will haue a very dainty nettle Cheeſe, which is the fineſt ſummer
Cheeſe which can be eaten; you ſhall doe in all things as was formerly
taught in the new milke Cheeſe compound; Only you ſhall put the curd
into a very thin cheeſe-fat, not about halfe an inch or a little better
deepe at moſt, and then when you come to dry them aſſoone as it is
draind from the brine, you ſhall lay it vpon freſh nettles an couer it
all ouer wit the ſame; and ſo lying where they may ſeele the aire, let
them ripe therein, obſerouing to renew your nettles once in two dayes,
and euery time you renew them, to turn the Cheeſe or Cheeſes, and to
gather your Nettles as much without ſtalks as may be, and to make the
bed both vunder and aloft as ſmooth as way be, for the more euen and
fewer wrinkles that your Cheeſe hath, the more daintie is your Houſ-wife
accounted.

The recipe for “new milke Cheeſe” is omitted, because it seems
unpractical to obtain “Cheeſelepbagge or runnet which is the ſtomacke
baggage of a young ſuckling calfe, which never taſted other food than
milke, where the curd lieth undiſgeſted”. Yet, there is note of modern
day speciality cheese makers picking up on the tradition.

(Recipe reconstructed and adapted from Hildegard’s circa 1157 treatise Physica: Liber Simplicis Medicina¦ ) These biscuits were first made over 900 years ago by the Christian saint, Hildegard of Bingen. She said that these spice biscuits should be taken at regular intervals to increase joy and positivity! I like to substitute half of the plain flour with spelt flour, and use all organic ingredients.

Let butter soften and then cream it with the brown sugar. Beat in the egg. Sift the dry ingredients. Add half the dry ingredients and mix. Add the other half and mix thoroughly. Dough may be chilled to make it workable. Heat oven to 350Â°. Form walnut sized balls of dough, place on greased and floured cookie sheet and press flat. Bake 12-15 minutes (till edges of are golden brown.)

Cool for 5 minutes, remove from cookie sheet and finish cooling on racks.

A plant oil – possibly sesame oil;
A “balsam-type” plant or root extract that may have come from bullrushes;
A plant-based gum – a natural sugar that may have been extracted from acacia;
crucially, a conifer tree resin, which was probably pine resin

When mixed into the oil, that resin would have given it antibacterial properties, protecting the body from decay.

“There are many odd things to put down, and, lest who reads them may fancy that I dined too well before I left Bistritz, let me put down my dinner exactly. I dined on what they called “robber steak”- bits of bacon, onion, and beef, seasoned with red pepper, and strung on sticks, and roasted over the fire, in simple style of the London cat’s meat!”

‘Sugar with aniseed, fennel seed, nutmeg, cinnamon, ginger [to make the] confection and to [then] beat them together in a mortar and heat them in the manner of food and drinks and dry first and last eat.’

Peader Kirk’s A Cocktail for Brexit

Thrown down the sink

Ampex 407 analogue tape had an issue in c. 1975 with the chemical composition of the glue that held the magnetic oxide onto the backing tape…

So when you played the tape, the oxide started to come off and the heads and the rollers started to gunge up and the tape would disintegrate. Every time you played it, you lost a bit of signal, mostly high end.

the solution, and the recipe:

Bake the tapes at 50ºF for 4 days continuously, which solidified the glue.
after testing, 3 hours at 50ºC (fan oven) was sufficient, providing it was played within a couple of hours… which is enough time to master the audio.

So I would set the oven on auto to turn on at 3am and load the tapes in the oven (ex-box) before I went to bed. Arise at 7ish, breakfast, shower, start mastering at 9am when they had cooled down…

Take 2 ounces of the powder of juniper, benjamine, and storax each 1 ounce, 6 drops of oyle of cloves, 10 grains of musk, beat all these together to a past with a little gum dragon, steeped in rose or orange flower water, and roul them up like big pease and flat them and dry them in a dish in the oven or sun and keep them for use they must be put on a shovel of coals and they will give a pleasing smell.

Ambrosia of The Gods

The food, sometimes the ointment or perfume, of the Greek and Roman gods:

In ancient Greek mythology, ambrosia (Greek: ἀμβροσία) is sometimes the food or drink of the Greek gods, often depicted as conferring immortality upon whoever consumed it. It was brought to the gods in Olympus by doves, so it may have been thought of in the Homeric tradition as a kind of divine exhalation of the Earth.

Ambrosia is sometimes depicted in ancient art as distributed by a nymph labeled with that name. In the myth of Lycurgus, an opponent to the wine god Dionysus, violence committed against Ambrosia turns her into a grapevine.

Tantalus was banished to the underworld for stealing ambrosia from Zeus’s table and for offering his son, boiled and cooked, as a peace offering.

Cecilia Lee’s Recipe for a Recipe

Start with a vessel to catch your ideas. Add a number of words. Weigh them if you wish. Skim off the tops. Taste and add more if bland.
Pepper it with adjectives. Add declarative verbs and nouns liberally. Let simmer until reduced in size.
Remove most of the adverbs. Reserve them for another use.
Measure carefully as needed. Season to taste.

Serves as many as you wish.

Note: Most will keep 5 to 10 years when refrigerated, even longer if left out to age gracefully.

Maids of Honour tart (also known as maids of honour cake is a traditional English baked tart consisting of a puff pastry shell filled with cheese curds. A variation is to add jam or almonds and nutmeg. Traditionally the tart was puff pasty filled with sweetened milk curds.

The tart is said to date back to Henry VIII when he witnesses some of the Queen’s Maid of honours eating some cakes and demanded to taste one. He found them delicious and named them after the maids. There are ideas that go even further, citing that that the maid who made the tarts was imprisoned and had to produce them solely for the King.

However, there is another theory that they were named after Anne Boleyn, a maid of honour at the time, who made the cakes for Henry VIII.

A tea room in Kew in Surrey, “The Original Maids of Honour”, dates back to the 18th Century and was set up specifically to sell these tarts.

“Why, there they are both, baked in that pie;
Whereof their mother daintily hath fed,
Eating the flesh that she herself hath bred.”

A number of stories in Greek mythology involve cannibalism, in particular cannibalism of close family members, for example the stories of Thyestes, Tereus and especially Cronus, who was Saturn in the Roman pantheon. The story of Tantalus also parallels this. These mythologies inspired Shakespeare’s cannibalism scene in Titus Andronicus… 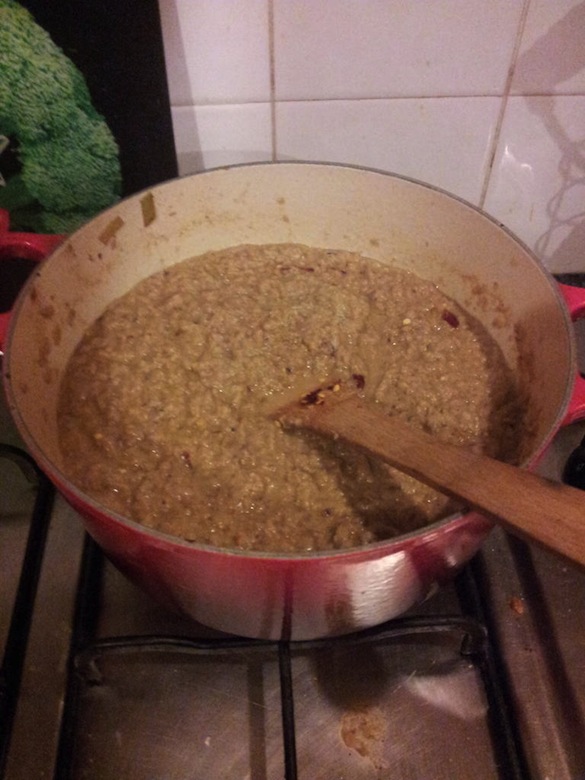 Found some plastic bags in the freezer, blended the contents with spices and apple sauce. Cannot be more specific.

Daniela Cascella’s Cooking Outside the Circle of Fire

A culinary nonsense limerick (Cooking some of the creatures featured in Chris Watson’s album, Outside the Circle of Fire)

1 RATTLE OF WOOD. Deathwatch beetles, the rattle of wood over a black stream.
2 AT DUSK. The Maasai say hippos spend the day on the river bed telling jokes. At dusk they surface, laughing.
3 DEEP ROAR. The deep roar of a red deer stag.
4 What a clever reference.
5 CONTACTS. Hyena contacts. 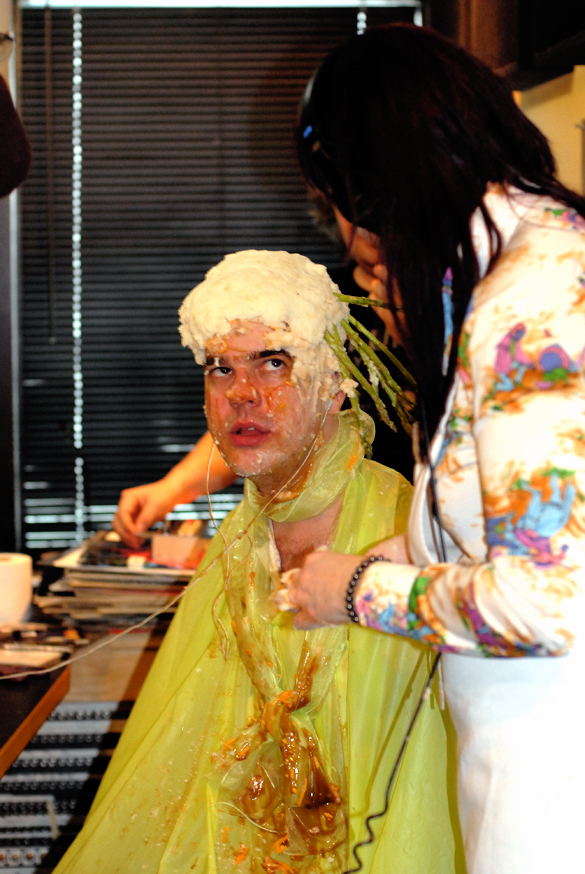 Stuck for what to make for those dinner guests? Just clear a space, put some plastic sheeting on the floor, crank up a very long Terry Riley record and put on a nice pinny.

Add the above to a human in accordance with your mood and their disposition.
Preferably in front of an audience.
For money.

A day of activity. The watchman called an alarm at 5 am to the effect that our flow was cracking up and all hands turned out immediately. All equipage was removed to safety but shortly before breakfast, a recurrence took place, the floe breaking up into a smaller section about 100 yards square. One crack passed under the runners of our large boat, ‘the james caird’ and opened so rapidly that we just saved her from falling in. A pronounced undulating swell is noticeable over the surface of the ice, apparently coming from the north west. All the large floes are breaking up under its influence, and in order to avoid a contretemps, the party is halved, taking a four hour watch.

A huge sea leopard, was secured during the morning, which enables us to increase the meat daily ration; and essential expedient to preserve the strength of all, under the present uncertain circumstances. In the stomach of the leopard, were found some 50 predigested fish, in excellent condition, their stomachs in turn crammed full with amphipods. The fish is reserved for tomorrow´s breakfast. The remainer of the dogs shot and skinned, and some steaks cut of the young dogs born in Antartica were fried, and proved exquisitely tender and flavoursome, especially Nelson, who tasted like veal.

Mutated Armadillo baked in its own lead shielding (from The Voices of Time, Phoenix, 1997)

Anonymous (from 1659) – Submitted by Daniela Cascella, from a recipe book from 1659, for the new Parliament

…one and fifty Anabaptists, blach’t in fair river water, threescore Independents, a quarter of a pound of John Lillburn’s bones beaten into a fine powder and sear’d, the better to unite with the rest; whereunto adde an ounce of Oyle of Saint-John’s-Wort, a drachme of the scrapings of the Divell’s cloven foot; five spoon-fulls of the marrow of old Oliver’s nose; half a Committee man; two Gallons of Aquafortis, seventy Scot’s haslets, together with a Kidderkin-full of Hugh Peter’s sighs and tears, evaporated into water in an Alembiqu’ made of an Organ-pipe..