I chose this one because I read that Mika Vainio gave you this idea – it’s from the Roman coast, and I remember a friend told me that when he went to pick up Mika at the airport in Rome, which is by the sea, he started to talk about Pasolini, and put his head out of the car window to catch some sea breeze smell, daydreaming. I always think about Pasolini and Coil when I’m there… and from that day on I also think about Mika. And it’s one of my fav. dishes I dream about and miss most here in Berlin.

This is as a traditional dish from the sea of Rome.

It was a poor dish: the beaches are so full of this very easy-to-collect molluscs, that it has been a valid competitor to clams, which not everybody could afford back in time. But if you can’t find them, you can replace with clams.

600gr Telline
300gr Spaghetti (i prefer a thick one – like Rummo Spaghetti Grossi N.5 – and a moderate pasta portion – 75g each leaves space for some antipasti or a second course)
1 garlic clove
a bunch of parsley sliced thin
fresh chilli – just a tiny hint
half a glass of white wine
pepper
lemon peel

Put the Telline in a bowl full of cold water and 70g of salt, and let them clean themselves for a couple of hours – if you collected the molluscs by yourself, let it stay longer, changing the salty water until you see no more sand coming out.

Prepare a pot of salty water for pasta, and while you bring it boil, cook the Telline. Its important to calibrate timing, cause you absolutely don’t want to overcook pasta, or abandon it in the colander and ruin it.

So if you feel unsure, better not to make all at the same time, but to prepare the Telline first.

Put some oil in a pan with the garlic clove (slightly crushed with its peel) and fresh chilli – not much, just a tiny bit. You don’t want it to cover the delicate fish taste – and when you see it become golden, add the Telline.

Toss it, add parsley, douse with white wine, on a high heat for a couple of minutes until the Telline is all opened up.

At this point, you can drain the sauce and pass it through a strainer, to avoid the annoying possibility of finding sand on your teeth. Remove garlic and some of the empty shells, but not all; part of the game is suckling them.

Once you have filtered the sauce, you can put it all back on the heat.

If you notice that the situation is too dry, you can add some olive oil or, here’s a trick – a spoon of potato starch to make the sauce more dense and creamy. Add a pinch of salt if you think it’s needed.

Once you reach a satisfying sauce texture, you can add the pasta. You’ll have to treat it like if you were cooking risotto, mixing it with the Telline until the sauce ties perfectly – adding, if necessary, a ladleful of the cooking pasta water you saved when you drained it earlier, and some ground pepper.

Once its on the plate, if you want you can grate some lemon peel on it.

Enjoy, possibly in the sun with loads of white wine! 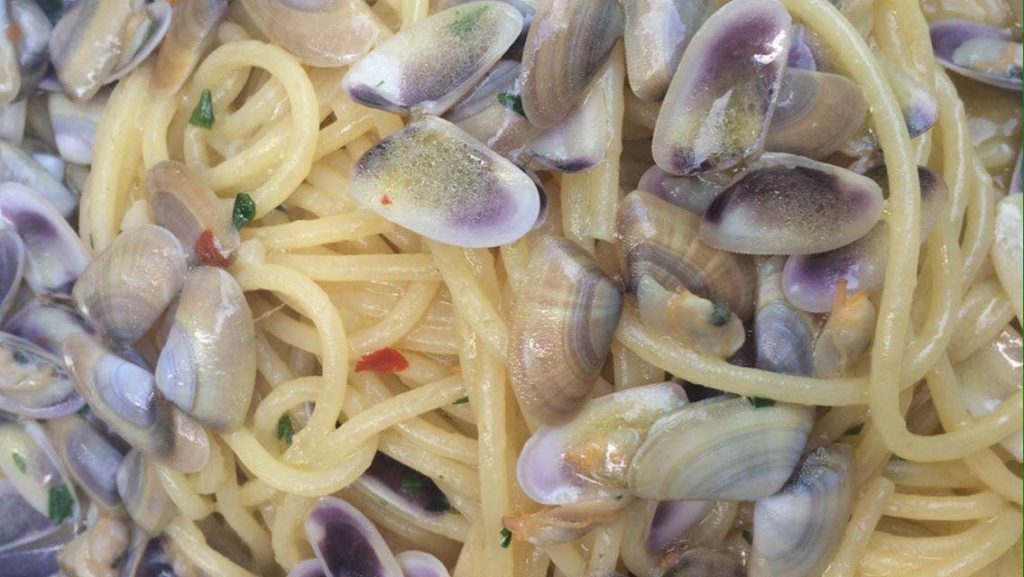 Take a large deep pan for the pasta and fill it with water, add a small handful of rock salt if you have some. Bring to the boil and add the pasta. Cook the pasta for the exact time it says in the pack. Normally about 11/12 mins.

Meanwhile take a large sauté pan and poor in olive oil, enough to make a film of oil on the bottom of the pan. With the back of a wooden spoon press the pealed garlic cloves into the oil (I find this easier to do in the pan before I put the oil in otherwise it’s slips and slides!) until lightly browned, take care not to burn the oil or the garlic. When lightly browned take out the garlic take off the heat and add the anchovies and break up so they almost dissolve into the oil. It might spit a bit when adding anchovies so take care.
Put pan back on the heat and add the prawns and the White wine and stir, let the wine evaporate (the heat should be quite high for this).

Add the chopped cherry tomatoes and stir allow them to boil in order to make a little sauce.

Add a pinch of pepperoncino, enough to add a little flavour and depending on how hot you want it.

When pasta is ready remove immediately from the heat drain pasta in a colander, tip pasta onto prawn mixture and mix together. Stir in the fresh parsley leaves and serve immediately.

Let the pasta slip into boiling water.
Bruise the fresh garlic and walnuts with a good shot of olive oil.
Add ewe’s cheese, crème fraîche, panna, mash everything well with a fork. Add the pesto, go on mashing until all is fluffy.
Add two spoons of the extended pesto for one serving of spaghetti and watch this while you
enjoy.

Goes well with a classic caprese (sliced tomatos, mozarella, rucola, olive oil, balsamico, sea salt and ground pepper). You can keep the pesto in the fridge for two days in a jar when covered with olive oil. 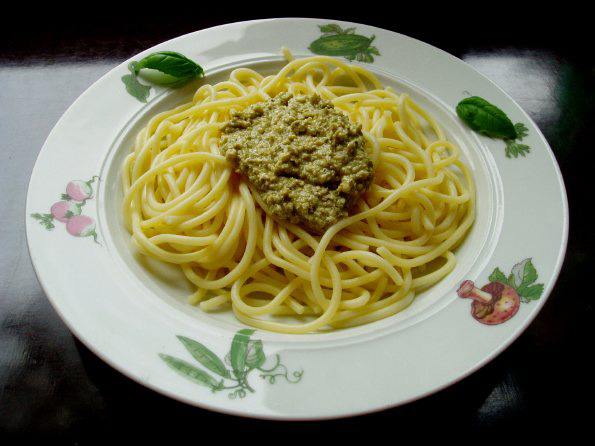 800g ground beef + 200g ground jerky
roast gently until medium, add 1 bottle of nice red italian, until the ground meat is just covered. Let it simmer softly for at least 2hrs while slowly adding the rest of
the vino to keep everything covered.

600g peeled and mashed tomatos plus grated ginger, ground cumin, cardamon, coriander, seasalt and black pepper for seasoning half way through and a proper dash of pasta water just before serving.

Add some fresh peppermint leaves and enjoy with Fusilli. 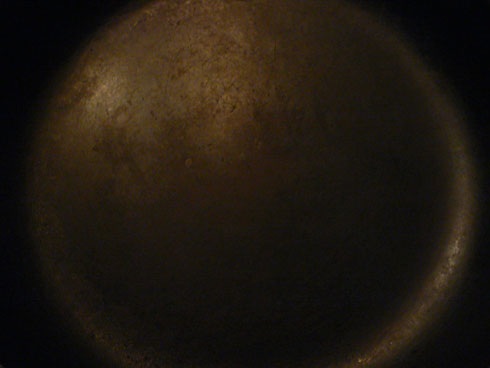 When you’ve forgotten to get the shopping in, for those times when you are just too busy to think… You can’t afford a restaurant meal, you can’t afford the time…

Ingredients – the things you should always have in your kitchen for such an eventuality:

1 tin chopped/plum tomatoes
3-5 cloves fresh garlic (depending on size)
liberal amounts of pepper, a generous pinch of salt
extra virgin olive oil
any herbs you have to hand – oregano, basil, thyme (optional)
parmesan cheese (always have some of this – I tend to forget sometimes)

Heat olive oil in a large pan, add finely chopped garlic, seal at high heat for 5-10 seconds, add tomatoes, bring to a simmer before adding pepper, salt.
Multiply amounts accordingly – one tin of tomatoes generally good for 2 people.
Having boiled large saucepan of (slightly salted) water in the meantime, add spoonful of olive oil before immersing pasta of choice. Spaghetti never disappoints.
By now the tomato sauce is well on the boil. Turn it right down and let the excess liquid evaporate. Simmer on a low heat.

Tip – warm the plates if you can, pasta cools very quickly and this’ll be cold before you’ve finished it if you don’t.

The pack of spaghetti will tell you to boil it for 8-10 minutes. At 7mins 30 you have to start checking its “al dente” status, and turn off when it’s how you like it. For me it’s 8 mins 20 – anything over 9 minutes gets mushy! 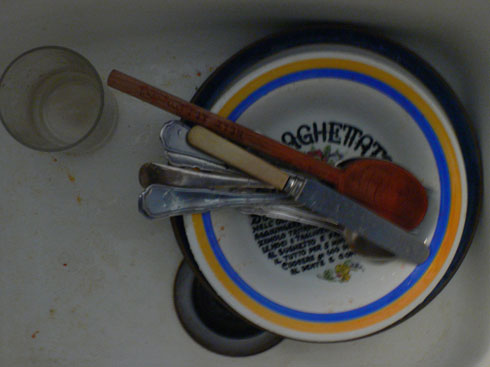 Now add the cream and olives, churn, heat up for some seconds and keep everything simmering very smoothly with closed lid for 8-10 minutes (while the Linguine get boiled). Stir now and then, add some more pepper, the sugo should be nice and fluffy now and ready to meet the pasta!